How Much Radiation Do You Get From Dental X-Rays? 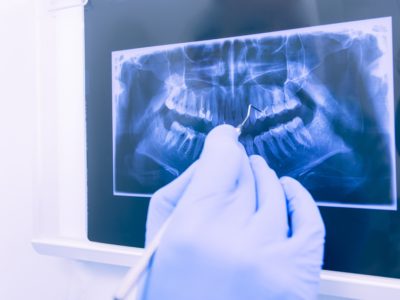 By Steve D. Rima, CHP
Just the mention of the word “radiation” conjures up an unpleasant image for most people. We associate it with bombs, cancer, and all manner of other bad things. But do you know that there are many beneficial uses of radiation? One type of radiation, x-rays, are used extensively in the medical and dental professions to diagnose and treat a wide variety of conditions.
Just how much radiation do you get from a dental x-ray and how harmful is it? First, let’s talk about what an x-ray is. X-rays are energy in the form of waves, identical to visible light. In fact, the only difference between light and x-rays is that light doesn’t have enough energy to go through your body and x-rays do. Both can make an image on photographic film, so both types of energy are used to make pictures; light makes photographs of the “outside” of objects, x-rays make pictures of the “inside” of objects, including your body.

A unit called a “rem” is used to measure radiation. A rem is a large unit, much like a mile is a large unit of length, so we usually use a millirem (mrem) instead, much as you would measure in inches instead of miles for most purposes. (It takes 1000 mrem to equal one rem.)

Advances in x-ray equipment, especially film technology, allow your dentist to get a good x-ray image using much less radiation than was previously required. A typical dental x-ray image exposes you to only about 2 or 3 mrem. The National Council on Radiation Protection (NCRP) says that the average resident of the U.S. receives about 360 mrem every year from background sources. This comes from outer space, radioactive materials in the earth, and small amounts of radioactive material in most foods we consume.

Obviously, you probably would not refuse to fly on an airplane, live in a brick house, read books, live without smoke detectors, or sleep with your spouse because of the small amount of radiation you receive from these activities. Since your dentist gains valuable information from x-rays to aid you in keeping healthy teeth, it is also not in your best interest to refuse dental x-rays because of the very small amount of radiation you receive from them.

Steven D. Rima is a Board Certified Health Physicist with over 20 years of experience in radiation safety.