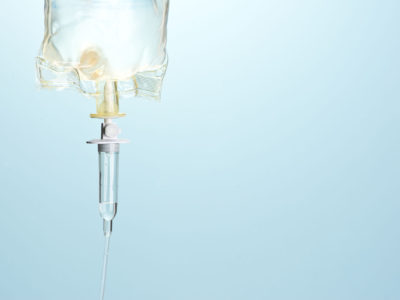 There are a number of reasons patients choose to use some form of sedation when they visit the dentist, the most common being fear or anxiety over their dental visit. In sedation dentistry, medication is used to help patients stay relaxed throughout the procedure. Not only do they not feel anything, but they likely will not remember the procedure at all. Many patients, however, confuse sedation dentistry with general anesthesia. It’s easiest to think of consciousness as a spectrum. At one end, the patient is completely awake and aware. At the opposing end, the patient is under general anesthesia and has no response to stimuli or recollection of their visit. The effects of IV sedation fall somewhere in the middle. With both types of sedation, however, it is important for a designated driver to take patients home after their procedure.

IV sedation, or intravenous sedation, is when a sedative is administered through a vein, allowing the medication to work very quickly. The level of medication can also be easily monitored and adjusted. The sedation can range from mild to deep, and patients commonly do not remember their dental treatment. Patients are usually unaware of their surroundings, but may still be able to respond to stimulation, such as being asked to open their eyes. It is a safe, effective, and predictable method of sedation. IV sedation is often recommended by dentists to make it easier to relax during longer treatments, such as implant placements, wisdom tooth extractions, and other invasive treatments.

General anesthesia is a combination of inhaled gases and IV sedation to make patients completely unaware of their surroundings and unresponsive to stimuli. General anesthesia can only be administered by an anesthesiologist, which is an MD specializing in anesthesia. They are not aware of any part of the procedure, nor can they remember it. While under the effects of general anesthesia, a patient can not be easily awakened until the medication wears off. While still a safe method, general anesthesia is not recommended for patients who are obese, are smokers, have diabetes, drug allergies, a history of seizures, or obstructive sleep apnea.

When is General Anesthesia Needed?

Dansville Dental Professionals has an on-site anesthesiologist, meaning we can administer both IV sedation and general anesthesia to our patients. New patients are invited to fill out a new patient form or can contact us today to set up an appointment.